On this episode, Frank and Mike explore the idea of time travel and time manipulation. Time travel is the concept of movement between certain points in time, analogous to moving between different points in space by an object or a person, typically using a hypothetical device known as a time machine. The subject is fascinating to think about. Especially when considering ideas likes a causal loop – where a future event ends up being the cause of a past event, which in turn is the cause of the future event. But what is time, do we even know? And can we travel through it?

Some say that time travel is impossible. Cutting-edge research suggests that space and time are linked; when you create new space, you create new time. However, it’s beyond our capacity as humans to create or change space… so we cannot create or manipulate time. Time travel has been said to be impossible for other reasons as well. Richard Muller, a professor at the University of California, explains: “The future does not yet exist … it is being created. Now is at the boundary, the shock front, the new time that is coming from nothing, the leading edge of time.”

Many people, however, claim to be time travelers or to have invented devices that can manipulate time. This time around, we’re talking about John Titor, the internet’s favorite time traveler. As well, we look into the research of Dr. David Anderson, who appears to have invented a time dilation field that can slow or increase the rate of time within it. We also listen to an interview with a modern-day time traveler, called Noah, and try to puzzle out if he’s telling the truth or is part of an ongoing hoax. In addition, we investigate the Trump family’s dark history – the suspicious that they had access to Nikola Tesla’s research materials and invented a time machine of their own. Finally, we look at several old photographs that appear to show modern day people captured on film far into the past.

The show is available here at your fingertips in what we call ‘light video format’ (accompanying photos and videos) on YouTube and in audio/podcast format on Soundcloud! Don’t forget to like and share to help spread the word. If you yourself are a time traveler, reading this page in our future or your past, please leave us feedback or send in a comment to troubledmindsradio@gmail.com and let us know what you think!

The IBM 5100 that John Titor was searching for. It had coding functionality that was hidden from the public, which is what John Titor needed to debug ruined computer systems far into the future. 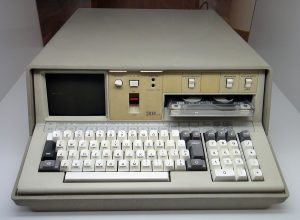 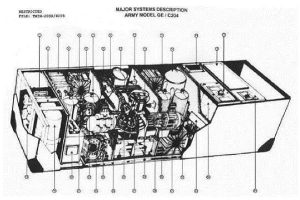 The collection of clips that summarize Dr. Anderson’s time manipulation device. It projected a field that allowed for time control within it.  Using the device, he and his team were able to slow down time, increase the rate of time, and in later iterations, move objects back and forwards through time.

The time traveler known only as Noah has several interesting things to say. We didn’t believe him, do you?

Ingersoll Lockwood  wrote a series of books detailing things that seem to have occurred after he died. Mainly, the adventures of Baron Trump… hundreds of years before Baron Trump would be born. The story also included other details that suggest the author was familiar with the current day Trump family and the United States presidency.

The story gets strange when we point out that John Trump, Donald Trump’s uncle, was the person responsible for going through the notes that Nikola Tesla left behind when he died. In those notes, a strange time manipulation field is mentioned.

Could it be that John Trump was actually John Titor or had seen John Titor’s future post war world?

A photo of a 1000 year old Mongolian mummy that appears to be wearing Adidas shoes. 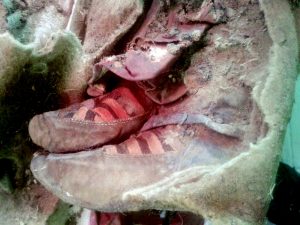 A painting done in 1850 that shows a scene reminiscent of today; a woman staring at her phone while walking, not paying attention to her surroundings. 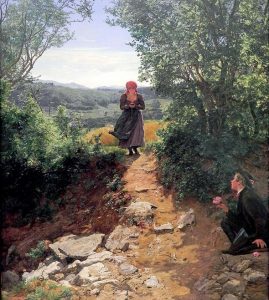 A photograph from 1917 that shows several individuals in period dress… except for the strange figure on the right hand side. 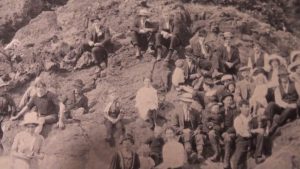 Another painting, this time from 1670, that appears to show a woman holding on to what looks like a cell phone. 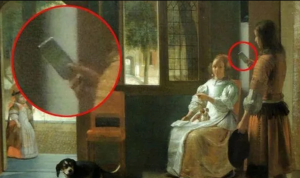 A painting of explorers reaching the new world, done in 1937. Can you find the suspicious looking character that seems to be checking his cell phone?

Four women out for a walk in 1938. One of them appears to be talking on a cell phone… 50 years before cell phones were as small as the one pictured. 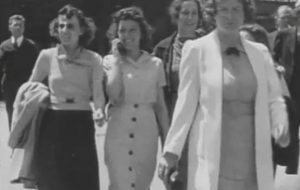 A modern day hipster, complete with camera, dark sunglasses, and graphic t-shirt… caught on film in 1941. 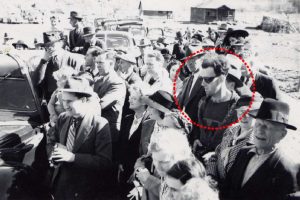 An animated gif showing a short clip from a Charlie Chaplin film made in 1928. The suspicious looking woman seems to be talking on a cell phone as she passes by the camera.